I took him and my Nan out for a meal at Toby Carvery one Tuesday teatime (don’t ask – it’s their favourite). Just as we were finished eating and Nan had again finished telling me that she’d never seen it so busy, Grandad got up to go to the toilet and asked her to pass him his coat. ‘What do you need your coat for to go to the toilet Fred?’ she replied agitatedly ‘Just pass me the bloody coat!’ he insisted. After much back and forth, she reluctantly handed over the coat and he proceeded to attempt to wrestle his way into it. I got up to help him, and together we eventually managed to guide his arms into the correct sleeves (easier said than done). As he turned to leave, he unknowingly dragged the bottom of his coat through the remains of the gravy on his plate.

‘Why does he need his coat to go to the toilet? He’s getting worse every day I tell you’ my Nan grumbled once again as he left. Whilst he was gone, I asked the waitress to bring us the bill. ‘Oh, that gentleman has just paid at the bar’, she replied, pointing to my Grandad as he shuffled away to the bathroom. His wallet was in his coat. Crafty bugger. 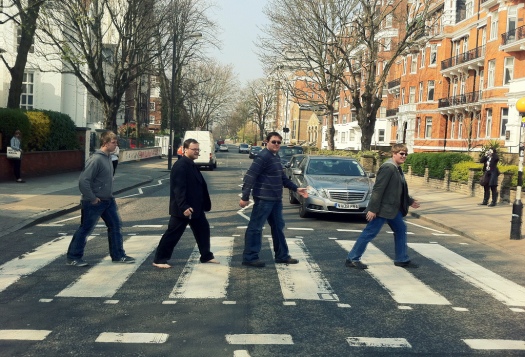 There’s certainly no shortage of travel writers out there at the moment. From one-man band bloggers who’ve ‘escaped the cubicle’ in search of a life on the road, to published writers in critically acclaimed travel guides, there’s one thing almost all of them have in common. They just don’t seem to be able to resist these textbook travel writing clichés…

So secret it’s being written about in a travel guide? I’m pretty confident that the little café you found after taking a wrong turn down a side street in Naples truly isn’t Italy’s best-kept secret. At least not anymore you big spoil sport. They serve Carling now for fuck’s sake!

There’s got to be another way to describe this?! Brushed, topped, tickled, tipped, teased, dashed. Lets mix it up a bit, yeh?

Just because you’ve found a bustly square lined with vintage boutiques and quirky little coffee shops that coincided with your pre conceived notions, that doesn’t make the street round the corner with a bookies and a McDonalds any less real. Quite the contrary.

I literally have no idea what this means. Did they get on? They do say opposites attract…

6. “You won’t find in the guidebooks”

You can just feel the smugness oozing through the page with this one (I won’t even mention the contradictory bit).

More of a threat than an endorsement. At least as far as the locals are concerned. Who do you think you are, Terminator?

I just saw a sheep shitting in the stream over there. It’s been touched, okay?

Now used largely to convey unfounded opinion as opposed to undisputed origin. The word is ironically losing its authenticity, one lazy article at a time.

The fact that the dictionary definition uses the example “picturesque villages nestled in the wooded hills” says it all. Yawn!

Admittedly, my gripe with these clichés is perhaps more of an occupational hazard than a considered observation (I read countless travel blogs on a daily basis). Needless to say, I’m sure I’m not the only one who’s repeatedly come across them. And there’s plenty more where that came from. Let me know in the comments if you can think of any that I’ve missed…

Feeling in a pretty good place tonight. Thanks to a very fortunate turn of events, I’ve gone from not knowing where I was going to sleep on Saturday, to living in a penthouse today. Penthouse or not though, I’m feeling more motivated and creative than ever before – and that can only be a good thing. Hopefully I’ll have some actual evidence of that in the coming months…for now here’s a little pick-me-up for anyone not relishing the thought of Monday morning. It’s never as bad as you think…

This summer, I won a competition with Exberliner magazine and was lucky enough to be invited to attend a week long intensive writing workshop, hosted by Rory Maclean and Kimberly Bradley. It was a privileged and humbling experience, and never have I had the pleasure of sharing a room with such an intelligent, interesting group of people. I think I’ll write a separate post about that week, but for now, I’d like to share a short piece I wrote during one of the exercises at the workshop. We were given 20 minutes to write a character sketch about a person of our choice, to which I chose my Grandad. The words came particularly easy for this one, there’s just endless material to go at with him. Maybe I’ll write some more when I get round to it…

‘It was fine!’ he said dismissively, as if even at the tender age of 92, not wanting to expose an ounce of vulnerability ‘I just turned the skin inside out!’

He was referring to an injury he had acquired a few days before, whilst undertaking a full redecoration of his spare bedroom (which he had recently been relegated to on a permanent basis by my Grandmother due to his snoring).

The type of job he would have once volunteered to do for others, there was no way he was going to pay someone else to do it. Mid way through manually stripping the wallpaper, he recalled losing his footing and suffering a quite severe gash on his right arm. He proceeded to patch himself up and took a 25-minute bus ride to hospital to get stitches. An incident we would have still been unaware of to this day, if it wasn’t for the bandage poking out from under his shirt when he arrived at our house.

And in a way, this epitomised his character. An impossibly proud man in every sense of the word, whose only fear was to be considered a burden by his loved ones. His appearance encapsulated this pride. Shoes perfectly shined and appearing to be worn for the first time, despite 30 years of service. His favourite shirt freshly ironed and buttoned right to the top. His stark white, impossibly full head of hair effortlessly slicked backwards. His face, cleanly shaven, aside from a small patch on his left cheek which had escaped his razor on this occasion.

He sat, slightly hunched over, his increasingly fragile frame clearly outlined by his shirt. His hands, swollen into the shape of boxing gloves through a history of arthritis, trying to wrestle with the knife and fork in front of him. ‘What’s this we’re eating Pam, it’s lovely’ he said to my Mother, in his thick Lancashire accent, ‘Salmon Tagliatelle’ she replied. ‘Ooh, salmon tiddly telly’ he said excitedly, turning to me with his eyebrows raised in appreciation.

Later that night, in a rare insight from him into his past, he recounted stories of helping out broken down drivers and giving lifts to hitchhikers on a regular basis (often with his family unknowingly asleep in the back). ‘These days, they’d run me over and flatten me on the way back!’ he chuckled, without a hint of self-entitlement.

Here we are! The moment you’ve all been waiting for – a glimpse into the mind of Tim O’Dwyer (who?!).

I’ve held off from one of these for quite some time. Mostly down to laziness admittedly, but also the notion of blogging as a whole generally leaves me slightly disillusioned. The ‘come and listen to all these amazing things I’ve got to say’ mindset really isn’t me – I’ll leave that to the travel bloggers (ooh he’s started early!). The amount of blatant ulterior motives is also a little disheartening. There’s only so many badly integrated links for cheap flights you can overlook before it becomes a bit tiring. I’ll leave it up to you to decipher whether or not that one was paid…

Alas, my motive here is by no means beyond what is obvious or admitted. Simply an excuse to get me writing. An online notepad if you would. And if anyone should actually read this – well that’s just a slightly embarrassing bonus I guess.